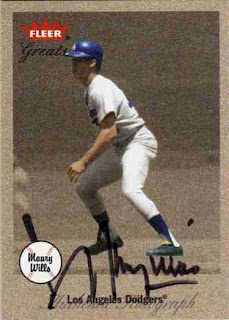 Who is this? Dodger shortstop Maury Wills.

What is this? An autograph card from 2002 Fleer Greats.

Where'd I get it? Atlanta Sports Cards in Alpharetta.

Why is this so special? I'm not sure if I'm ecstatic for getting a certified autograph of an all-time great for five bucks or mad that I found it so cheap. This card cost something like 1/1000th of a scrub prospect's superfractor. Can someone explain this to me? It's not the first time Maury was disrespected, on the advice of their scouts Topps declined to sign Maury to a contract in the minors. Later on they scrambled to get him on a card once he hit the bigs and became a star. Upstart Fleer beat them to the punch in 1963, and Topps ended up faking a 1962 rookie card in their MVP subset in 1975. Maury's '62 season was amazing as he won the MVP award and broke Ty Cobb's single season stolen base record. Like Maris a year earlier, Maury got the dreaded Asterisk because he played in a 162 game season that year. Asterisk or no, he revolutionized the use of the stolen base as a weapon in the 60's and led the Dodgers to 3 World Series titles. Plus he named his son Bump. How cool is that. I bought a ton of these packs when they first came out but never landed an autograph. I would have been thrilled to pull this gold sparkly card with Maury's John Hancock. You suckers buy the superfractors, I'll buy up the stars. 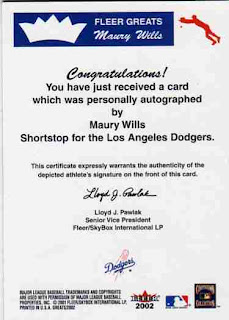