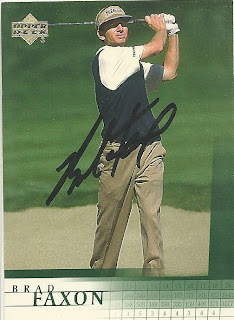 Who is this? PGA Champions Tour Golfer Brad Faxon.
What is this? An autograph card from 2001 Upper Deck Golf
Where'd I get it? I got this card signed by Brad Faxon at the 2009 Deutsche Bank Championship.
How much did it cost? About 25 cents.

Why is this so special? Brad Faxon was a member of the PGA tour from 1984 until 2010, winning a total of $17.76 million in earnings. Over the course of that time, Faxon won eight tournaments, including the 1991 and 2005 Buick Opens, the 1999 and 2000 B.C. Opens, and the International. In addition, Faxon was also a member of the Ryder Cup team, received the Payne Stewart Award in 2001, and lead the PGA Tour in putting multiple times.

When he turned 50 last August, Faxon joined the Champions Tour and wasted little time before making his mark, winning the Insperity Championship. That is projected to be just the first of many Champions Tour wins for Faxon.

Faxon was also nice enough to sign this 2001 Upper Deck Stat Leaders card for me. 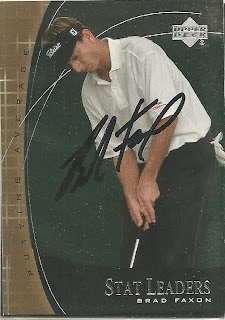 Would you be willing to trade one?