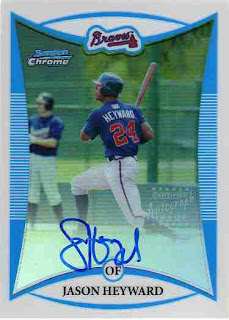 Who is this? Braves prospect Jason Heyward.

Where'd I get it? Trade with Heartbreaking Cards of Staggering Genius.

How much did it cost? Got it in trade.

Why is this so special? Man, I haven't posted in a long time. I need to get on the ball. I've got all my 2009 pet projects more or less up and running so expect more posts in February.

Simply put, Jason Heyward is a Freaking Beast. He's the #3 overall prospect on Keith Law's top 100 prospects list and after the year he had in Rome last year, I'm not surprised. He's been compared to Cliff Floyd and Fred McGriff and some even say that Golden Boy Jeff Francoeur is just keeping his right feild spot warm for when he arrives in Atlanta. Yeah, he's that well thought of. He's also another local prospect, from Henry County, GA. Do not be surprised if he is in Atlanta very soon. I had been hunting for an affordable autograph of him since his cards started coming out in the fall of 2007 and Heartbreaking floored me when he sent this card in a trade. I've got a big surprise waiting to sent to him, but as anyone knows who's traded with me before, I'm kind of slow. I'll get to it soon though. I have to say of all the cards I got in 2008, other than the Florida Agriculture Mark Lemke card, this is my favorite. 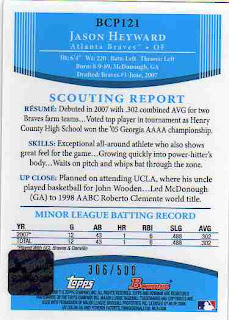 this just in.... Frank just traded his rights to Texas for Kevin Millwood.