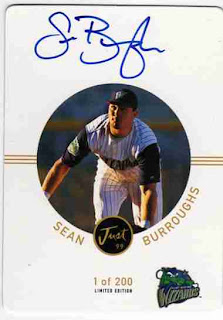 Who is this? Padres prospect Sean Burroughs.

Why is this so special? I was surprised to see that Sean was out of the league while looking up his stats. A few years ago he was a solid third base prospect for San Diego, but got injured and fell out of favor due to his lack of power. I thought he would at least be playing somewhere, but I don't see any stats for him for 2008. He's the son of unlikely MVP candidate Jeff Burroughs and Sean was born in Atlanta while Jeff was a member of the Braves. The card is ok looking, typical Just Minors. The signature is clear, on card and on a nice white background. Just got that part right at least. This must be some sort of parallel as it is die cut with round corners and hand numbered 77 out of 200. He's out of the majors but he's still got memories of the Little League World Series and his interview with Letterman. 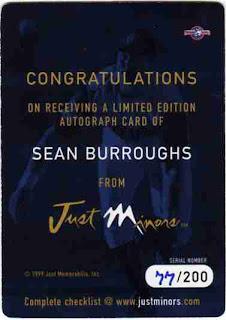 I opened a pack of Upper Deck Heroes the other day and got a Kelly Johnson autograph patch card. Too bad I collect Padres autographs. might trade

I've got a few Padres autos and relics, just shoot me an e-mail if you're interested in a swap.