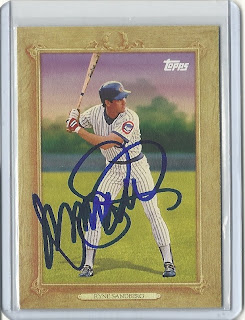 Who is this? Baseball Hall of Famer and current Lehigh Valley Iron Pigs Manager Ryne Sandberg.
What is this? An autograph card from 2010 Topps Series 1 Turkey Red.
Where'd I get it? I got the card from a nickel box at a local card show and got it autographed by Ryne Sandberg as he was entering McCoy Stadium for a Lehigh Valley Iron Pigs game vs. the Pawtucket Red Sox.
How much did it cost? A nickel.

Why is this so special? Ryne Sandberg is a member of the Baseball Hall of Fame who is best known for his career with the Chicago Cubs. Sanberg now manages the Lehigh Valley Iron Pigs, the AAA-Affiliate of the Philadelphia Phillies, and is often mentioned as a possible Major League manager in the near future.

This autograph is special because it is the first autograph that I have ever gotten from a Baseball Hall of Famer in person and Mr. Sandberg was very nice about signing for the twenty-or-so fans that were waiting for him outside of McCoy Stadium before the game.

I was lucky enough to get four other cards signed by Sandberg the next day inside of the stadium and hope to get a couple more cards signed by him next time that he comes to town.
Posted by George at 4:03 PM

Nice job. Sandberg signed a card for me two years ago.

Any chance you would be willing to get an 85 and 89 Topps Sandberg card signed for me next time you go? I am working on getting 89 and 84 Cubs team sets signed by all the players and am having trouble tracking down Ryno... I have a good amount of hockey and baseball autos I could trade... Lmk