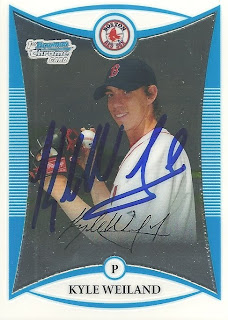 Who is this? Boston Red Sox pitcher Kyle Weiland.
What is this? An autograph card from 2008 Bowman Draft Picks and Prospects Chrome.
Where'd I get it? I got this card signed by Kyle before a Pawtucket Red Sox game in June.
How much did it cost? I bought the card for 10 cents at a local card show.

Why is this so special? Kyle Weiland made his Major League debut this past Sunday (7/10/2011) against the Baltimore Orioles, but things did not go as planned. In fact, Kyle became the first player to be ejected from his Major League debut since 2008 when he hit Vladimir Guerrero in the fifth inning. Overall, Weiland's debut was a mixed bag. He pitched 3+ scoreless innings, but was tagged for six runs in the second inning.

Hopefully Weiland's debut will just be a minor bump on the road to a long and successful Major League career. Pitching for AAA Pawtucket this year, Kyle has been an International League leader in strikeouts and threw an eight-inning one-hitter against the Rochester Red Wings on June 29th.

Kyle has been a great signer all year. In addition to the 2008 Bowman Draft Picks and Prospects Chrome card, Kyle also signed this 2008 TriSTAR Prospects Plus Boston Top Pick Pitchers card. I already had Stephen Fife, a pitcher for Boston's AA Portland Sea Dogs, sign the card and I only need Bryan Price, now in the Indians' organization, to finish-off the card. 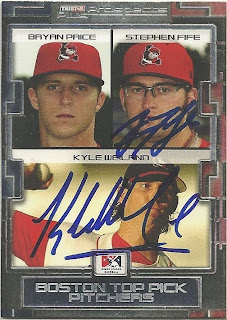