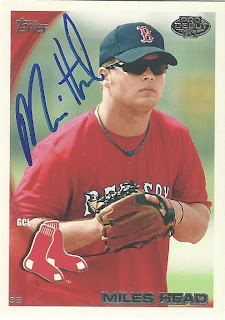 Who is this? Red Sox minor league First Baseman Miles Head.
What is this? An autograph card from 2010 Topps Pro Debut.
Where'd I get it? I got this card signed by Miles before the 2010 Futures at Fenway Game between the New York-Penn League Lowell Spinners (Boston) and the Jamestown Jammers (Florida).
How much did it cost? About 25 cents.

Why is this so special? If Miles never made it to the pros, he would still be noteworthy for being one of the best Little League baseball players of his generation. In fact, as a 12 year-old, Miles hit 75 homeruns and later won the Triple Crown at the Continental Amateur Baseball Association World Series as a 14 year-old.

Unfortunately, Miles dominance did not continue in High School and he slipped to the Boston Red Sox in the 26th round of the 2009 draft. After a moderately successful 2010 season, Miles has shattered all expectations in 2011. Playing for the Single-A Greenville Drive and Salem Red Sox, Miles has hit 17 homeruns with a .954 OPS in his first 85 games and was elected to the South Atlantic League All-Star Game.

Now, things are looking up for Miles as he continues to slug his way through the minors. If he keeps up his performance for the rest of the year, it will be difficult for scouts and prospectors to ignore this 20 year-old as he charts his path towards Fenway Park.
Posted by George at 10:00 PM