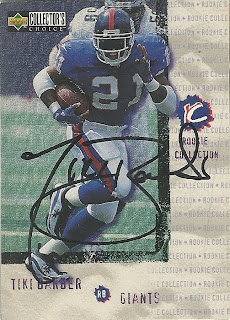 Who is this? Former New York Giants' Running Back Tiki Barber.
What is this? An autograph card from 1997 Collectors' Choice.
Where'd I get it? I got this card signed in 2001 when the NFC Champion New York Giants practiced against the New England Patriots at Bryant College in Rhode Island.
How much did it cost? I got the card out of a pack of 1997 Collectors' Choice when I was 9 years-old.

Why is this so special? Tiki Barber is the New York Giants all-time rushing and receptions leader and was a three-time All-Pro running back. Barber shocked many Giants' fans when he chose to retire from football in 2006 after rushing for 1,662 yards and 5 TDs in his final season. However, after four seasons away from football, Barber is attempting a comeback to football for the 2011 season.

What makes this autograph so special is how well Barber signed it. In all of my years of autograph collecting, Tiki's signature is easily one of the best-looking and clear autographs that I have ever seen. It is also memorable because the Giants players were much nicer about signing than the Patriots players, even though we were almost all New England fans.
Posted by George at 11:33 AM

Nice. Considering how bad a lot of NFL player autographs have gotten, that looks really sharp.