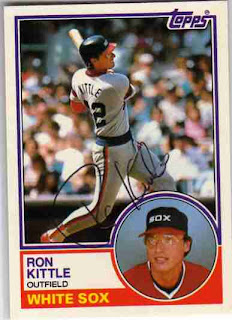 Who is this? White Sox outfielder Ron Kittle.

How much did it cost? Not much.

Why is this so special? 1983 was the first year I really paid close attention to what was going on in baseball, and since he was a home run hitter who wore big clunky glasses like me Ron was one of my favorites. Ron won the AL Rookie of the Year award that year and the high-power, low-average slugger was popular with Sox fans. He had a few good years with Chicago before the injury bug hit. He was traded to the Yankees in 1986 and bounced around the American League for the rest of his career. Ron is now a motivational speaker, and I sincerely hope he's not living in a van down by the river. He has gotten Lasik or something though, and no longer wears the glasses. That makes me very sad. I have no earthly idea where I got this card, it was probably in a cheap auto box at a show or in a large lot of autographs I bought a while back. The autograph is nice but the ballpoint doesn't show up very well on the card. This auto on his superior 1983 Fleer card is much better. 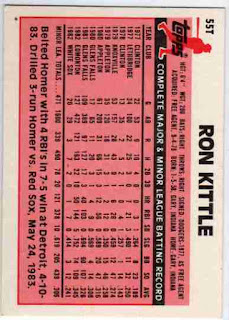 Even though the 83 Fleer looks superior, that doesn't look bad.